A Paul Gauguin Tahitian Masterpiece Comes to Auction in Paris

Artcurial reveals the highlight of its major sales of Impressionist & Modern Art: a Tahitian masterpiece by Paul Gauguin: Te Bourao II. Set to be auctioned by Artcurial for the very first time on 3 December 2019, it is estimated at €5-7M.

“In this legacy work from his Tahitian cycle, Paul Gauguin passionately delivers the quintessence of his Tahitian obsessions. The subtle palette reveals an enigmatic nature, full of symbols: a stream which twists and turns, the flower in bloom, the horseman who is riding away...Man’s fleeting stay on earth reveals itself in the creator’s brush strokes, from the lost paradise of childhood to the obscure mystery of the after life. ”

Painted in Tahiti in 1897, this oil on canvas is a legacy piece that encapsulates the artist’s Tahitian themes and obsessions from a period when he was plagued by multiple torments.

Te Bourao II comes from a major cycle of nine paintings that Paul Gauguin produced in Tahiti and sent back to Paris in 1898, for a solo exhibition at the Ambroise Vollard gallery. Amongst these masterpieces was his iconic piece D’où venons-nous ? Que sommes-nous ? Où allons-nous ?. Te Bourao II is the only work in this set that is still privately owned; the eight others hang in the world’s most prestigious institutions: the Boston Museum of Fine Arts, the Hermitage Museum in St Petersburg and the Musée d’Orsay in Paris.

In the years since 1898, Te Bourao II has featured in the major exhibitions on Paul Gauguin’s Tahitian period all over the world, at the Fogg Art Museum in Cambridge, the Baltimore Museum of Art and the Grand Palais and Musée d’Orsay in Paris. It was even the object of a long-term loan to the Metropolitan Museum of Art in New York, where it was displayed for ten years from 2007 to 2017.

“Artcurial is once again honoured to be presenting a major work with historical ties to the world's foremost museums.

Te Bourao II leaves the MET picture frames to be offered on the market for the first time. It has been more than 20 years since any work from Paul Gauguin’s Tahitian period has been sold on the French market.”

It was in this context that Paul Gauguin created in 1897, the oil on canvas Te Bourao II that Artcurial will offer at auction on 3 December 2019. In a famous letter to his friend Daniel de Monfreid dated February 1898, Gauguin describes his presumed suicide attempt and his desire to produce a “large canvas” (D’où venons-nous ? Que sommes-nous ? Où allons-nous ?) before dying that would be likely to win him posthumous renown. In another letter to Monfreid, he explains his intention to send this work back, along with others. In July, he is as good as his word and sends nine works (including Te Bourao II) to Paris for his intended exhibition. The paintings arrive in France in early November and are received, stretched and framed by Daniel de Monfreid and the artist Georges Chaudet.

On 17 November 1898, the exhibition dedicated to the Tahitian works of Paul Gauguin opened at the Galerie Ambroise Vollard. The exhibition was a limited success, although Edgar Degas purchased one painting. Nonetheless, it would play a fundamental role in the emergence of the Gauguin legend and his decisive influence on the avant-garde artists who followed him. 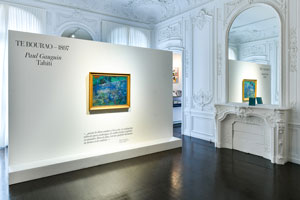