“In the countries where I go, women are the pillars of society, but it is the men who are on top.”

These words, spoken in 2013, perfectly sum-up the Women Are Heroes project which JR initiated in 2007-2008, and from which this image, taken in Liberia, is one of the most iconic visuals. A naked pregnant woman, lying down asleep, seems to be at perfect peace. Yet behind this peaceful aspect, JR delivers a darker, underlying visual story – that of women sexually assaulted during the war, that of women who resisted, that of women suffering but who are still standing and, in many ways, are the pillars of society. This image conveys the courage, the strength and the dignity of these women – confronting men who for some of them were their persecutors. A way for them, through an image in plain sight to everyone, to free themselves from their yoke.

Women Are Heroes is one of JR’s most significant series, he met extraordinary women in Brazil in the Favelas of Rio and in Monrovia in Africa and had them tell their stories - through words but also through an attitude or a look in front of the lens. 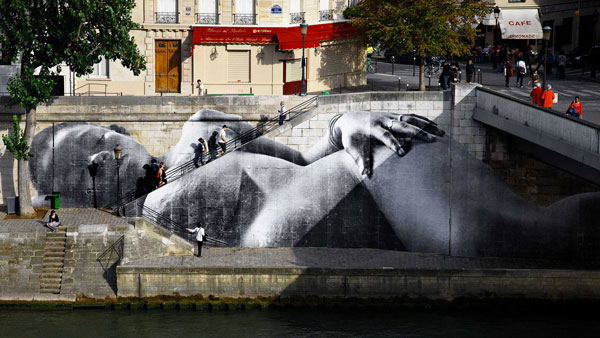 A visual from this photograph was notably displayed in an extremely large format in 2009 on the quays of the Ile Saint-Louis in Paris, during the life-size Women Are Heroes project. Strolling along the Seine, onlookers would have been stopped in their tracks, fascinated by the impact of this image and by its humanity. In this, JR’s work today fits fully into three categories – urban, contemporary and humanist.

This artwork, originating from the London gallery Lazaridès on the occasion of the October 2008 exposition entitled 20 MM: Women, was offered for auction on February 23rd this year. It set a new auction record for a work by JR, breaking the €100,000 barrier for the first time.

Informations
Artcurial will be happy to welcome you again once the situation allows.
Until then, you can contact Arnaud Oliveux for advice and estimation requests.