A pair of Qianlong vases for sale at Artcurial

On November 25th, Artcurial will auction the private collection of a Parisian art lover. A few steps from the Seine, in an Art Deco apartment in the Golden Triangle, Artcurial’s teams discovered a collection that epitomizes Parisian elegance, composed of antique paintings, Asian art, neoclassical furniture, modern paintings and silverware. An exceptional pair of Bianhu vases in Chinese porcelain, monochrome blue made for the Qianlong emperor (1736-1795) particularly caught the attention of our experts. Estimated at €400,000 – 600,000, these vases come from the Château de Ferrières during the time of Baron James de Rothschild (1792-1868). 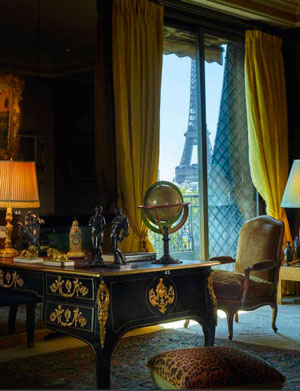 An apartment overlooking the Seine: a showcase for works of art
The collection offered for sale was housed in a splendid 1920s building, in a department decorated by Claude Gallet in the 1980s. The damask silk walls are home to Vedute and a remarkable collection of drawings by Théophile Steinlen.

In a classical taste, an important Virgin and Child by Girolamo Alibrandi Messine, a beautiful set of silverware and neoclassical furniture are displayed alongside. 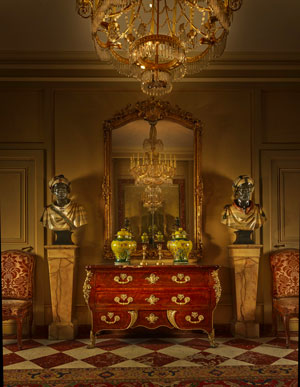 Asian art at its peak: a precious pair of imperial Qianlong vases
The vases offered for sale, in midnight blue, have a specific shape called Bianhu. Particularly appreciated by the Qianlong emperor, this shape is said to come from the gourds used by pilgrims from Egypt, Syria or Iran. Two large side panels moulded in slight relief also follow the shape of these vases with stylized parrot handles.

The importance of this pair of vases has to be put into historical context. The reign of the Qianlong emperor marked the peak of Chinese artistic influence. Awakened to the splendours of the Empire, Qianlong appears as a protector and lover of Chinese art. He dedicated his life to literature and to perfecting the imperial factories in the Forbidden City. The monochrome colours - oxblood, yellow and midnight blue - which had already flourished under his father's reign, continued to flourish.

A pair of very rare vases with a prestigious provenance: Rothschild
Beyond the extreme rarity of these imperial vases, they have a prestigious European provenance. Acquired at Hôtel Drouot in 1993, the vases come from the Château de Ferrières where they were photographed in the 1860s, during the time of Baron James de Rothschild (1792-1868). They were also illustrated in the auction catalogue of furniture and works of art from the Château de Ferrières and the Hôtel Lambert, organised in Monte Carlo on 25th and 26th May 1975.

An original Far Eastern inspired bronze mounting
The vases are also decorated with an early 19th century gilded bronze mounting of Chinese inspiration, probably English, which can be compared to the production of Benjamin Lewis Vulliamy (1780-1854), a London-based supplier to Kings George III and George IV. The fantasy of the dragons on the neck and the geometric interlacing on the base enhance the elegant sobriety of the vases.

Infinitely rare on the market, both in terms of quality and provenance, these works bear witness to the refinement and taste of their successive owners.

Auction
An Apartment overlooking the Seine, the collection of a Parisian amateur
25th November - 2pm