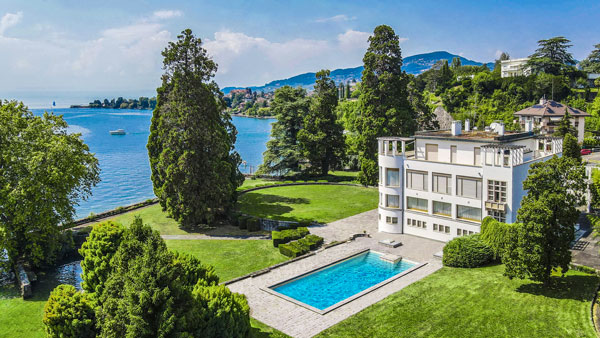 Between lake, mountains and vineyards, Montreux Riviera is like a postcard landscape. An authentic little piece of paradise which has seduced so many artists, men of letters and travellers in search of beauty, calm and inspiration. 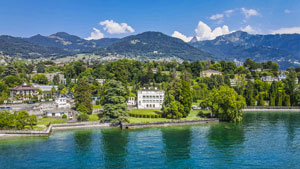 It is probably not by chance that Charlie Chaplin chose the heights of Vevey to spend the last 25 years of his life, that Freddie Mercury immortalised Lake Geneva and the Grammont peaks on the cover of the album "Made in Heaven", that Igor Stravinski composed "Le Sacre du printemps" in Montreux or that Prince declared his love for Lavaux in a song named after the famous terraced vineyard, a UNESCO World Heritage Site.

The Villa Karma is a masterpiece of modern architecture located in the canton of Vaud in the municipality of Montreux, Switzerland. The building is located on the site of a former Benedictine priory.

Its location facing the lake on a plot of over 13'000M2 as well as the panoramic view are exceptional. It offers more than 1'000M2 of living space, 20 rooms, 10 bedrooms, 10 bathrooms, 1 indoor and 1 outdoor swimming pool, 1 private port and 1 heliport to name but a few of its qualities.

All the materials are first choice: black, white and pink marble, golden tiles, precious wood, bronze, nothing has been left to chance. 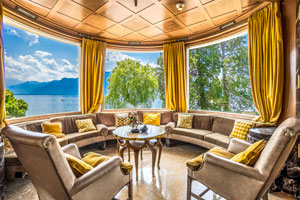 In 1903, Doctor Theodor Beer, professor of comparative physiology at the University of Vienna and lover of Bertha Eckstein-Diener, asked an architect from Vevey, Henry Lavanchy (1836-1914), for a project to transform his villa into " la Maladaire ". But in 1904, a new architect, Adolf Loos, took over Lavanchy's project and transformed it in depth, revising the entire interior decoration.

The original building measured 14.5 by 11.5 metres. Loos' plan was to increase this area with a single room about 3.5 metres wide, extending on three of the original sides and to surround it with four turrets located at the corners of the structure painted entirely in white; the original roof was removed and replaced by an attic terrace.

Between 1903 and 1906, Loos also worked on the interior decoration of the villa, and in particular the main bathroom, made entirely of black St. Triphon marble and closed by bronze doors. He then abandoned the building site which, from 1908, was taken over by the architect of Croatian origin Hugo Ehrlich and completed in 1912.

The building is listed as a Swiss cultural heritage of national importance.