“Artcurial stands out with contemporary art with a total of 24.8 million €. The sale of a Van Gogh painting for 7 million € allows them to register the highest sale in impressionist & modern art” 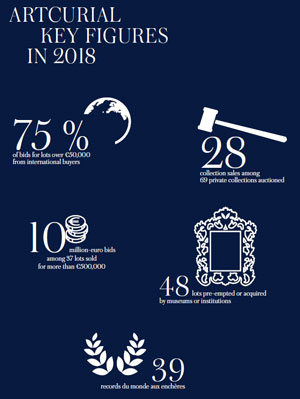 The balance between the four departments of Artcurial remains steady. XXth and XXIst century arts represent 38% of sales volumes and are the main contributors to the company’s results. They are followed by Artcurial Motorcars at 27%, then Fine Arts (18%) and finally Luxury and Lifestyle (17%) with sales mainly held in Monaco.

Artcurial’s dynamism and the relevance of its strategies have been borne out with continued growth in sales volumes. 2018 has been marked by numerous successful sales, such as Retromobile 2018 for Artcurial Motorcars, Paris#Marrakech, Il était une fois le Ritz Paris, Collections Aristophil, Repertorio Sottsass, Au temps du Japonisme and C.R.E.A.M, as well as excellent results for Impressionist and Modern Art with the sale of a Van Gogh landscape for more than €7m/$8.3m and an increase of 26% for the Post-War and Contemporary Art Department.

The 5 first Only Online auctions, which we held in the second half of this year, confirmed he potential of this new approach. They showed sale rates equivalent or superior to traditional auctions when the offer corresponded to the specificities of the internet. They attracted a younger public due to their event-based themes. The regularity of these sales will be increased in 2019.

Finally, our international presence, which plays a significant role in Artcurial’s growing success, will be strengthened next year. We will be reinforcing our commitment to Monaco with new links, including a permanent showroom and a Modern and Contemporary Art auction next July. Alongside further development of our regional network, we are giving much thought to raising our presence in Europe and the rest of the world. This is the idea behind the sale dedicated to Tribal Art, which we are organising in collaboration with the Brussels auction house Lempertz, to be held next April.